Doing the birthday card keepsake book for Gabby inspired me to see what else I could bind into a book. I dug through our box of wedding stuff and found stacks of wedding cards. We had over 200 guests and tons of out of town guests who sent cards. I think I'll save that project for another time.

I found our RSVP cards that I have been saving for the day I figure out what to do with them. We had asked guests to write some wishes or words of wisdom on the back of the cards. We received quite a few creative and funny ones. Some people drew pictures, glued on photos or wrote quotes. One even attached a saying from a fortune cookie. I'm really happy we still have these mementos from our wedding.

The difference between this book and the birthday card book is that this one has a hard cover and I didn't need to sew the spine together.

Pictures of the materials used and more details on the process can be found under this post.


All the RSVP Cards: 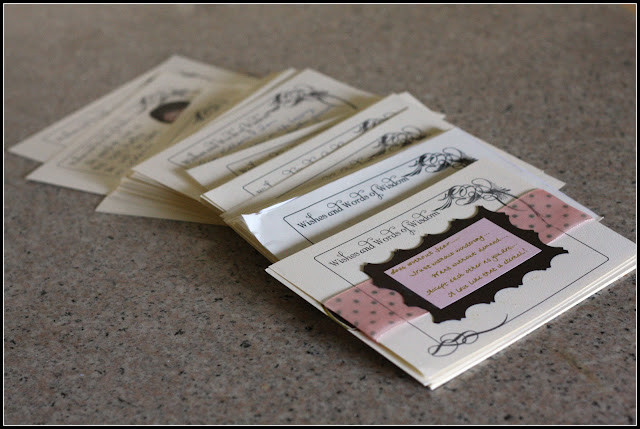 Cards Ready to be Glued: I made a mistake and forgot to add one or two blank protector pages at the beginning and end of the book. These pages will be glued directly to the hard cover of the book and help secure the book to the cover. 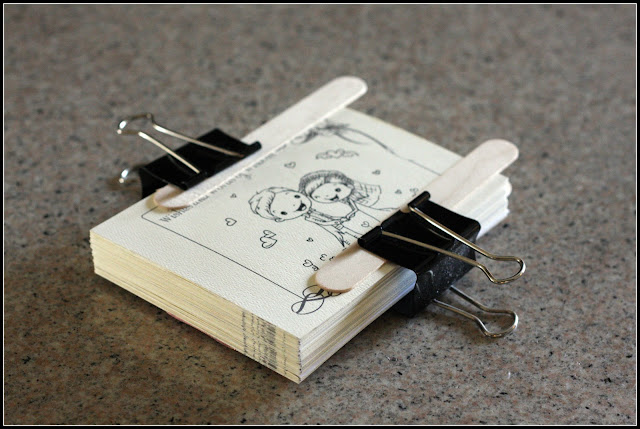 Glued and Waiting to Dry: 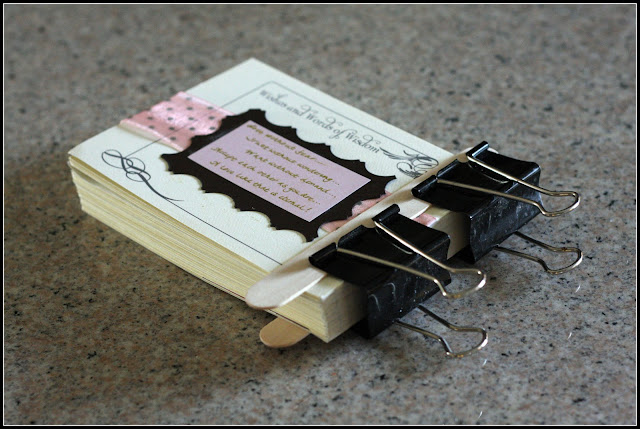 Close-up of the Glued Spine: Again, make sure you have blank pages at the beginning and end. I had to add it after the fact and is not as secure. 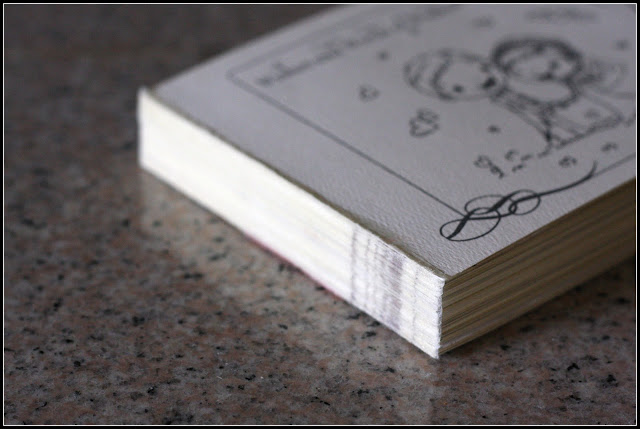 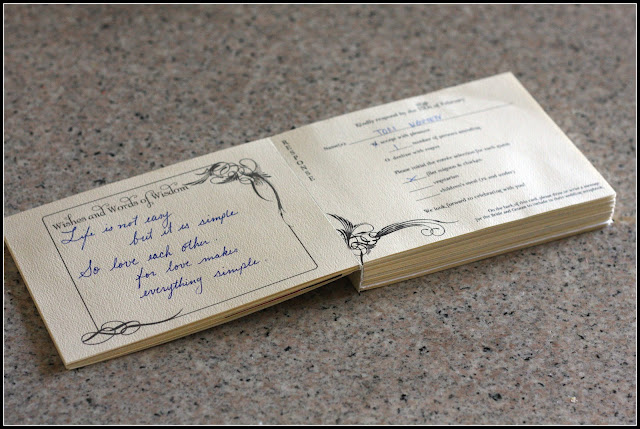 Supplies for the Book Cover: 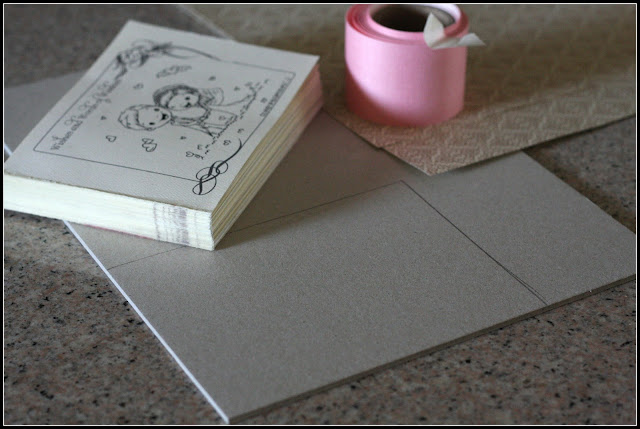 Cut the Bookboard with an Exacto Knife: My cutting skills need work. 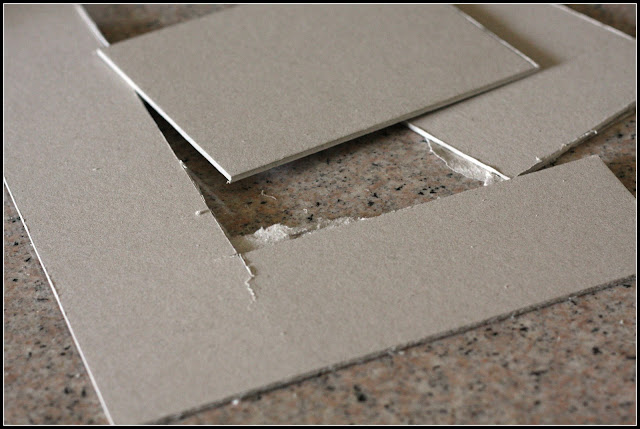 I cut and glued a decorative paper sheet to each board, leaving a small gap for the book tape. I accidentally cut the pink book tape a little short so patched it. I used a thin strip of cardboard from a notepad I had to use as the spine. Leave a quarter inch gap between the spine cardboard piece and front/back cover so that you can close the book.


Putting Together the Cover: 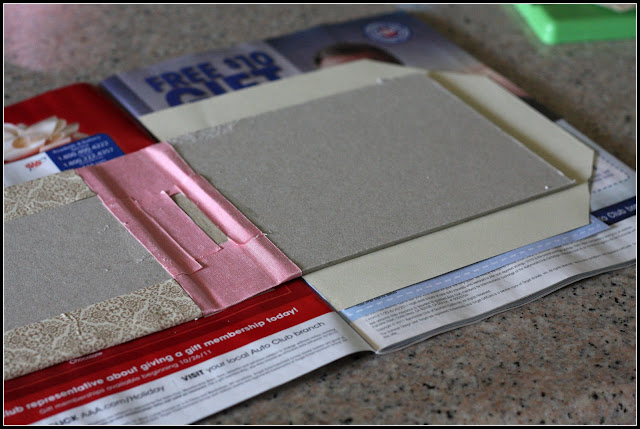 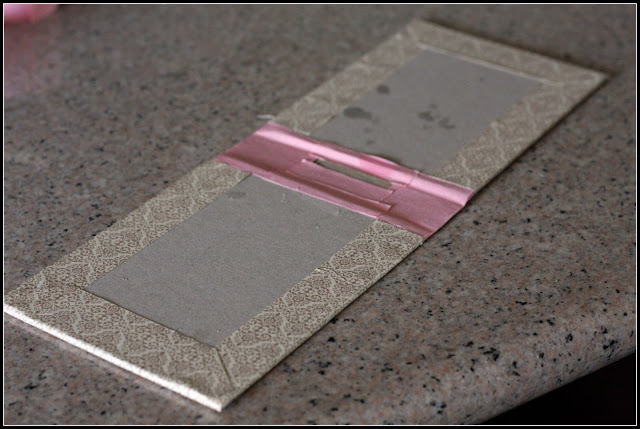 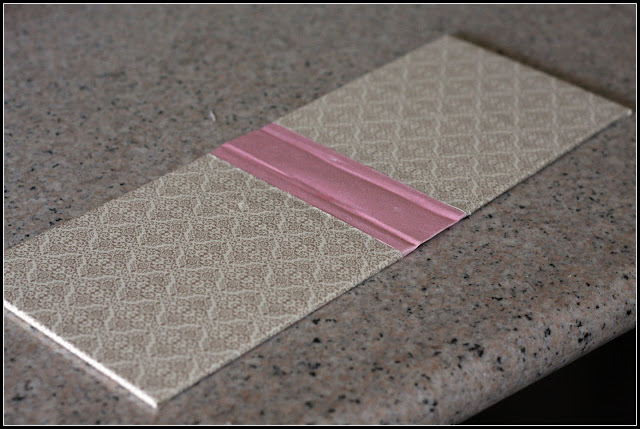 Take your book and spread glue on the front page, back page and spine. Lay the text block straight onto the spine of the cover and close the book. This will bind the book right to the cover. 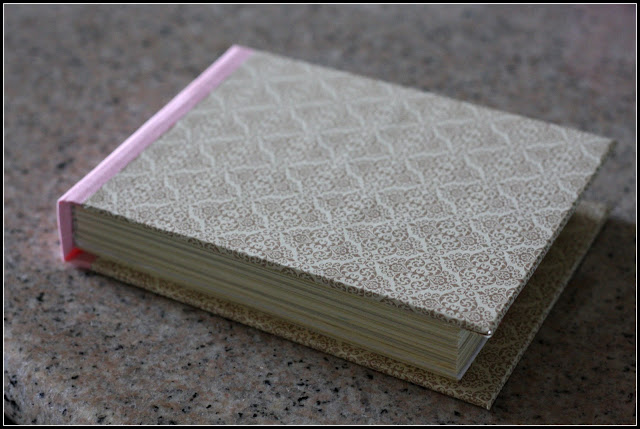 I'm always on the lookout for fun things to take Gabby to during the week. It breaks up the day and she gets a chance to play with other kids. Our city hosted a one hour Superhero party for kids ages 2 to 5 so I thought it would be something fun Gabby would enjoy. For $10, the kids drew, painted, danced, played a few games, went on a parade and had a snack.

There aren't too many Superhero costumes for girls so I put together one for Gabby. It ended up being more cost effective than if I just bought costume from the store. I was lucky and found a Superhero t-shirt on clearance at Old Navy to pair up with Gabby's tutu from her Halloween costume. All she needed was a superhero cape, which was fairly fast and inexpensive to make.
DIY Toddler Girl's Superhero Cape and Costume Tutorial: 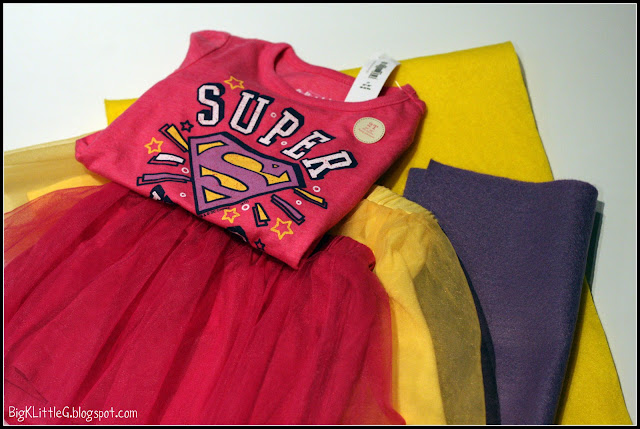 Step 1: Using a sheet of newspaper folded in half, loosely draw an outline of the top of the cape. I just eyeballed how big I thought Gabby was. Once cut, I used the newspaper to put it around Gabby's shoulders and adjusted the size as needed. 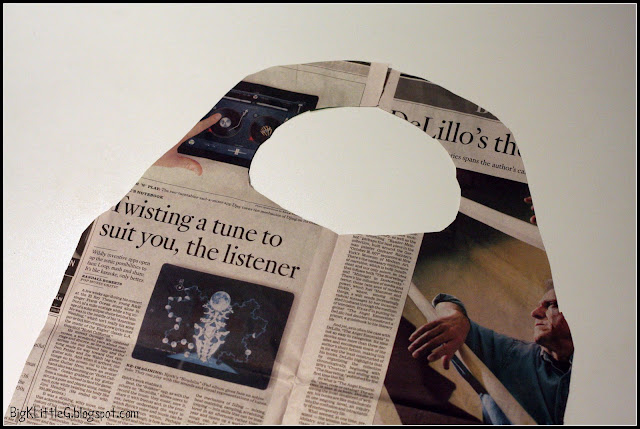 Step 2: Use the newspaper as a template to cut the yellow piece of felt. Adjust the length as needed. I made Gabby's a little on the longer side so she can use in dress up play as she gets older.

Step 3 (Optional Superhero Badge): There is an "S" on Gabby's t-shirt so I went with that for the badge on her cape. Find an image of an "S" online, print it out about 7" long and carefully cut out an outline. Using the backside of the felt piece, flip the image over and trace an outline of the "S" directly on the felt piece. This way, when you cut out the felt piece, you don't have to worry about the pen marks since it is on the back. 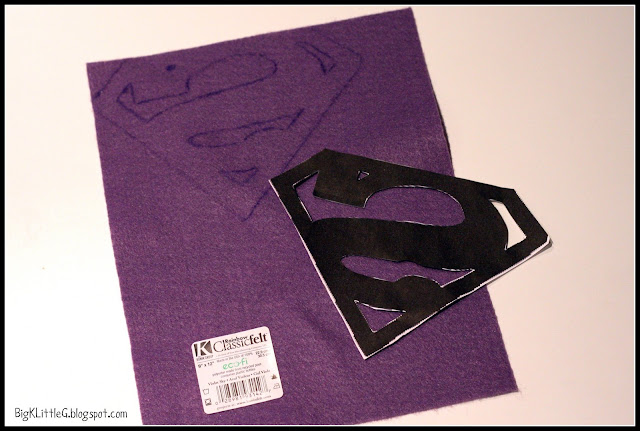 Step 4 (Optional Superhero Badge): Once the "S" is cut, sew it on a yellow piece of felt the same shape. I suppose you could iron it on as well but I am not familiar with using iron ons and figure I would mess it up. Besides, I thought the thread gives the badge a nice embossed look. I added another layer of dark purple felt underneath to make the badge stand out on the bright yellow. 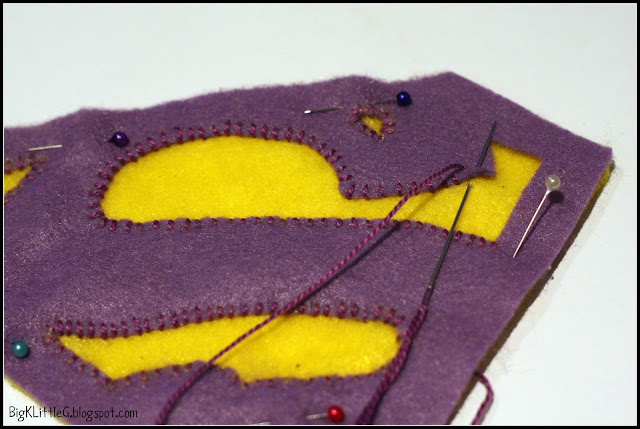 Step 5: Add an one inch square piece of velcro to the straps of the cape and you're good to go. It's super simple and you have an instant Superhero. 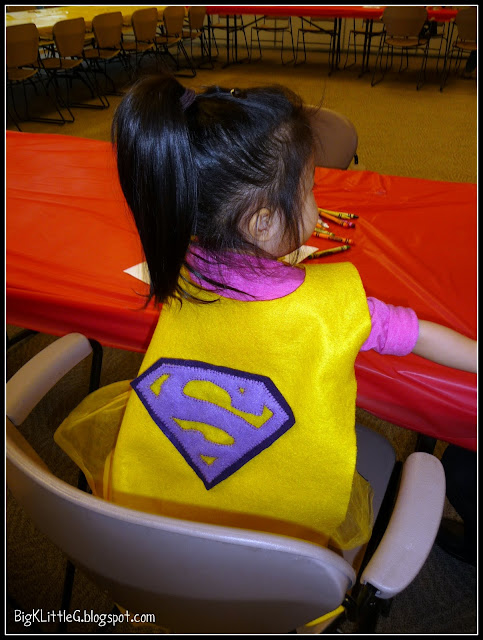 Super Gabby:  Whenever Gabby is in a new environment, it takes her a little while to soak everything in and warm up. With a squirmy toddler, it's hard to get a smiling picture but she had fun! 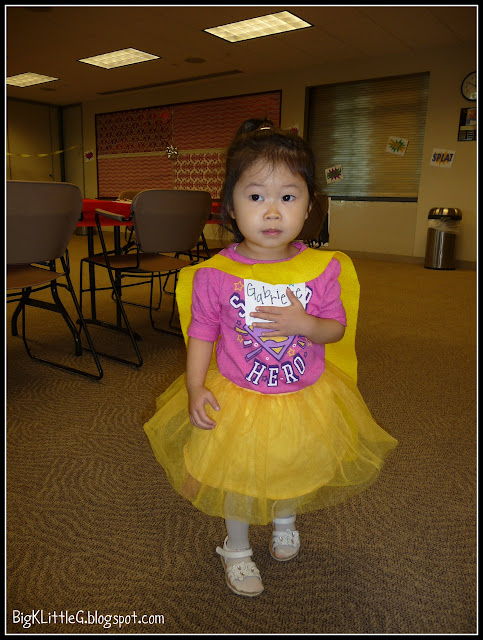 Super G Playing Games with the other Superheros: She's the smallest one out of the bunch. 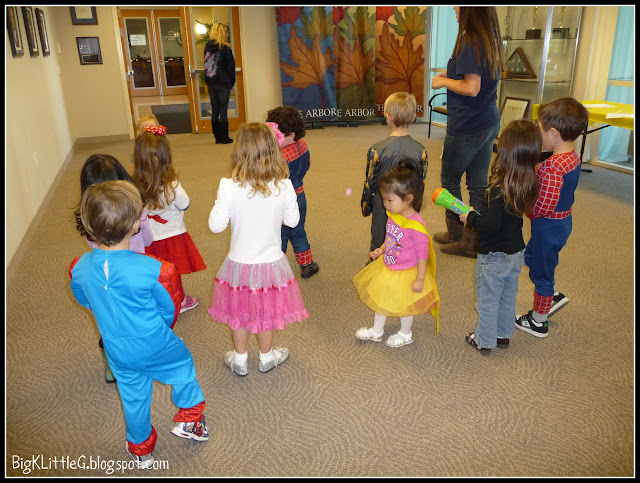 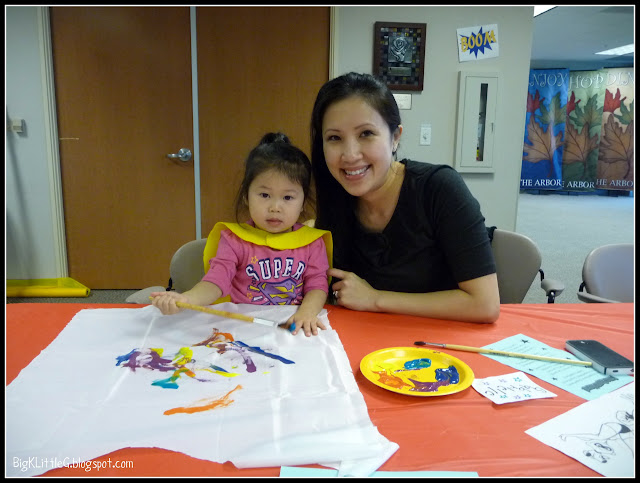 Overall, Gabby and I had a great time. It is so bittersweet seeing her grow up and participate in big girl events. She is definitely not a baby anymore. Once she goes off to school, I know I will be crying more than she will.

Typical of Southern California, the weather turned warm and kick started my allergies. It evolved into a full blown cold and I was down for the count the first week of the year. Besides a lingering cough, I'm beginning to feel like my old self again and can't wait to catch up on all my posts.

Where to start. My brother gave us Lakers tickets so we took Gabby to her very first professional sporting event. Her favorite part was seeing all the Lakers Girls. She would stand up and dance along with them. Towards the end of fourth quarter, Gabby got a little bored so I let her watch videos on my phone. Otherwise, she did relatively well and sat on our laps the whole time.

Me and Little G at the Staples Center: 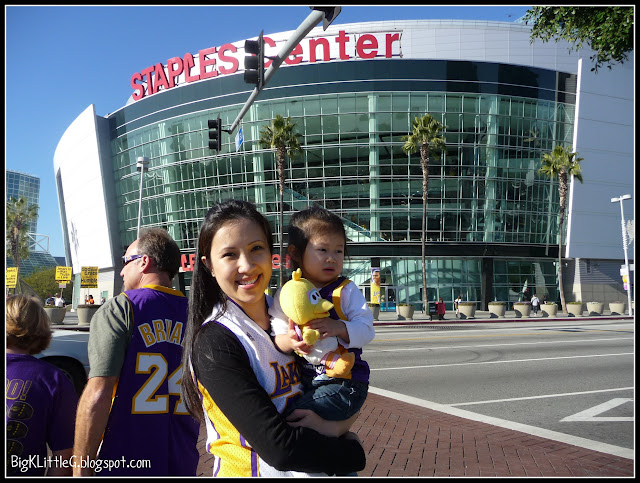 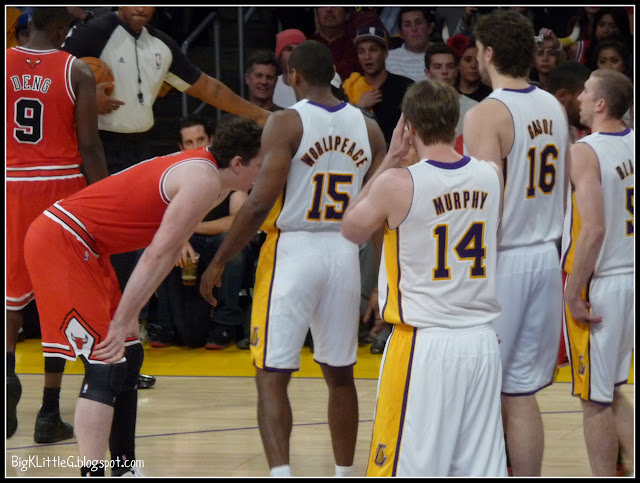 Another first. Gabby attended her very first New Year's Eve party dressed in her warmest pajamas. We said we would leave our friend's house the moment Gabby showed signs of wariness but she was partying like it was 1999. She and her buddy, Isaiah, had a blast playing, dancing and running around until past midnight. We are normally pretty strict on her bedtime but took an exception since she was being extra good and did not melt down once. It took several nights afterwards to get her back on her sleeping schedule again but it was worth it for the smiles and memories. 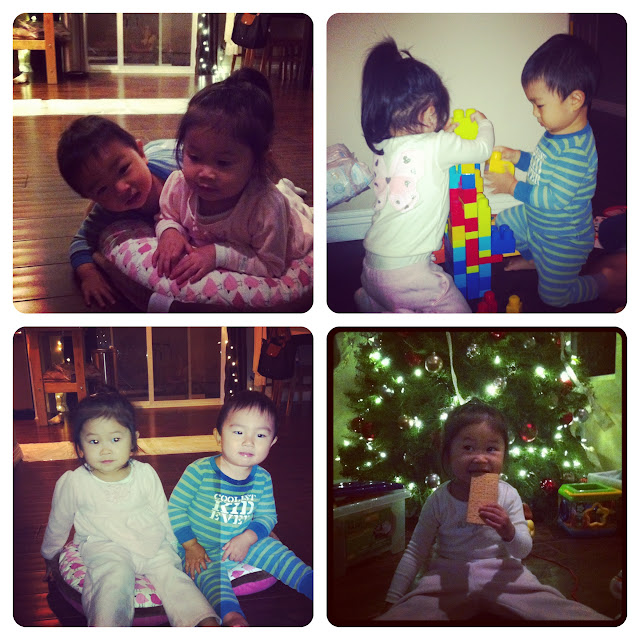 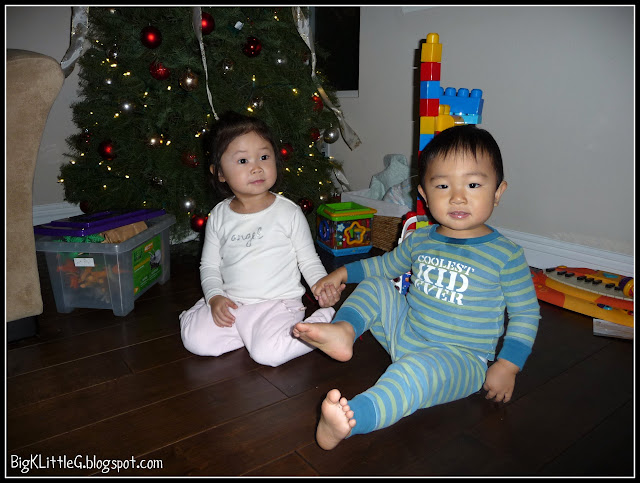 What else. Oh yes. Another first. A couple of days ago, I discovered this.

Girl with the Scribbled Tattoo: 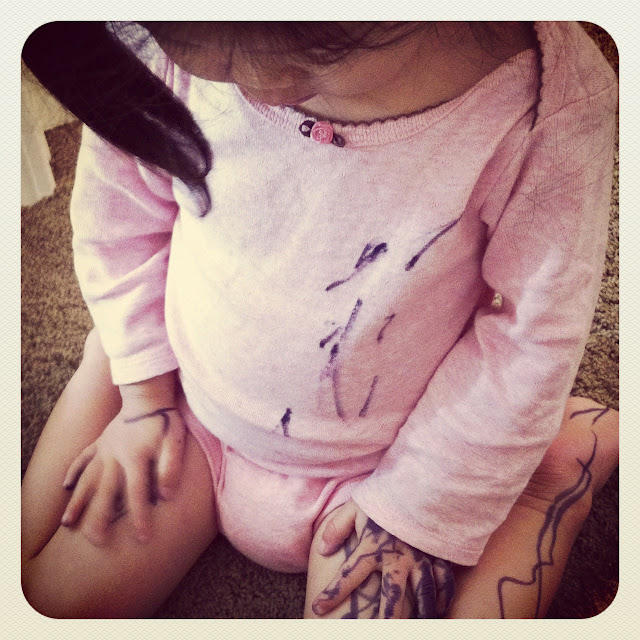 When I saw Gabby, she looked up at me smiling so proudly of the artwork she drew on her hand and said, "Look, Mama, happy face!" Apparently she also tried drawing a "ho ho" which is a pirate on her left thigh and an "O" on her right thigh. The markings on the bottom of her feet were "oopsies". I asked her what happened to her shirt and she said "dropped it" - meaning she dropped the pen by accident. Right.

In the corner of my eye saw this. I didn't know whether to laugh or cry. I think I may have done a little of both. 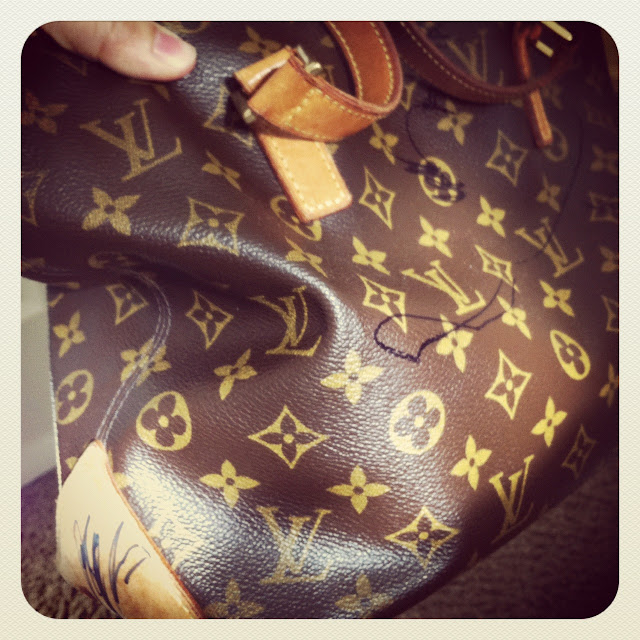 It was completely my fault for forgetting I had a mini sharpie in my bag. I had it in the inside zipped up pocket of my bag under my bed. Most of the markings on the monogrammed leather came off but the tan leather on the side and bottom is done for. I think I made it worse trying to scrub it off. Sigh.

All I can say is that kids are fast and when you think you baby proofed enough, you really haven't. During Gabby's birthday party a few months ago, I set my camera down on the table for a second but didn't push it in far enough. Gabby reached up to grab it and it dropped. The latch for the battery and SD card broke but the camera works just fine. I haven't had time to fix it so just used tape to secure it. 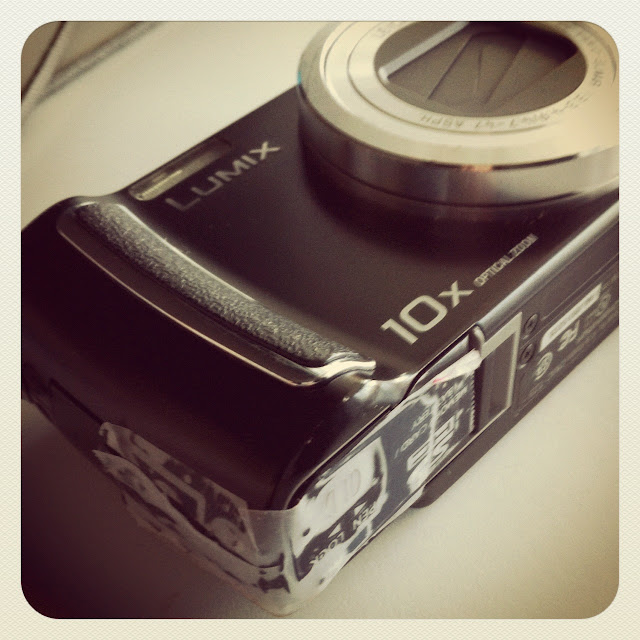 I'm going to look very cool pulling out a taped up camera from my now one of a kind purse. So many firsts in a short period of time. I can't wait to see what's in store for the rest of 2012. :)

Posted by Big K at 4:32 PM No comments: Links to this post